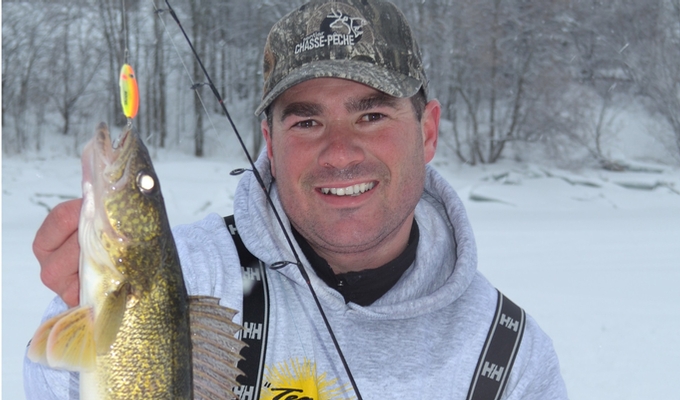 Walleye at the start of the season

As ice is starting to set on bodies of water, a sort of frenzy is taking hold of all ice fishermen. It’s only a question of time before the ice cover can support the weight of ice fishermen. For walleyes, it’s the intensive feeding period that started in mid-fall and will last up until the first weeks of January. This feeding period helps walleye to survive winter. Therefore, if there is one period of time when you don’t want to miss all of the action, it’s the beginning of January. These moments are generally very productive for walleye fishing amateurs.

Each lake and river containing populations of walleyes is different in terms of abundance. If the lac St-Pierre, in Quebec, is known for its great population of walleyes, other bodies of water merely contains any. However, what is important to remember is that, whatever the stream, walleyes’ behavioural habits don’t change. At the start of the season, walleyes feed intensively. Consequently, it is a good idea to find their ‘’pantry’’. In fact, it is necessary to discover a spot where food is abundant, but at the same time where efforts from walleyes in ice-cold water are limited. One of my favorite spots is a feeding plateau. Large plateaus that are less than 10-feet deep should get a lot of consideration. These areas attract forage fish, aquatic insects and, of course, walleyes! In early season, the food is abundant in shallow areas. It is mandatory not to be stationary. If a spot offers few results, then don’t hesitate to move to another one. These extra efforts will eventually pay! Furthermore, mouths of tributaries are very interesting too. Water movements will bring food in the stream. Walleyes are naturally attracted by these areas. The food naturally moves, and walleyes subsequently don’t have to deploy great efforts during their attacks. Another spot where I like to throw a few tip-ups or simply fish with rippers, are rock tips. These slightly shallow structures are true hideouts. The tips surrounding river pools are very productive areas. You can throw a few lines at a depth of about 15 to 20 feet at mid-day, then a few more on the tip up at a depth of 3 to 4 feet of free water beneath the ice. At the day of the day, walleyes will hunt near the surface. You could be surprised by the results. Finally, along the shores can hide a few treasures.

However, if you find a river pool with a high leap, exploit it! Oftentimes, walleyes are looking for leaps in order to hunt for preys while at the same time being sheltered from the currents, without any efforts!

In the majority of American states and some Canadian provinces, live baits are allowed for ice fishing. These are, in my opinion, the most attractive baits for walleyes. Their movements and odours attract walleyes in a flash. In Quebec, live baits for ice fishing are now considered legal since December 20, 2017. However, dead minnows are authorized in many areas of the province. Contrary to the ideas shared by many skeptics, dead minnows are very efficient to fish walleyes. They emit a strong smell that no artificial perfume can match. To use them as baits, simply hook them up lengthwise in a way that the front of the minnow comes out on the tip of the fishhook. Of course, they don’t equal live baits, but they are still a nice alternative to these restrictive regulations.

Nowadays, a great variety of artificial baits are offered to fish for walleyes. Numerous companies are thinking outside the box to create and reinvent artificial baits. Some contain marbles, attractive odours, special shapes, and even fluorescent colours that illuminate in the dark. As such, the Northland Company, a major bait maker for ice fishing, innovated substantially these past few years. Also, this company makes a very nice line of baits created for walleye fishing. I could enumerate dozens of models with different sizes and colours. I will, however, reduce this list to a ‘’Top 10’’ of the most famous ones: Buck Shot Rattle Spoon from Northland, Shad Rap from Rapala, Ice Jigging from Williams, Puppet Minnow from Northland, Chubby Darter from Salmo, Macho Minnow from Northland, Ice Jigging from Rapala, Flutter Spoon from Northland, Swedish Pimple and Cast Champ (Mr Champ) from Lurh Jensen.

Walleyes are not active all day long. Even though you might catch walleyes at mid-day, activity is increased at specific periods of the day, during very short laps of times. The hour that precedes dawn and the hour that precedes twilight are very active periods for this species. Walleyes are in hunting mode. They benefit from this low brightness level to intensely feed. This particularity comes from their eyes, which have a layer of pigments that reflect the light and is called choroid coat. This layer provides walleyes with an exceptional night vision. From my experience, walleyes can sometimes continue to feed in the dark, a few hours after sunset. Frequently, large ones will catch your baits. Do not hesitate to place your baits in very shallow water, sometimes at merely 2 feet under the ice, and sometimes where food exists. However, it is recommended to drill holes during daylight, before all action gets underway. If you only have a few hours to fish for walleyes, opt for these two periods of intensive feeding periods. They lead to success!

For walleye fishing amateurs, the beginning of the season is without a doubt the most rewarding period of winter season. Until mid-January, look for areas of choice that are less than 10 feet deep. Place your baits at about 12 inches of the substrate. Be patient, and put into practice my tips to ensure that your efforts will be successful.

Happy fishing and have a good season!